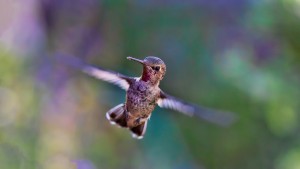 We couldn’t just have one hummingbird. Elvis in his quiet imperial stance was not enough. We wanted more Elvises. The Guru grants what the Heart desires. We now have seven hummingbirds dancing off and on the deck, causing mischief and chaos.

Going out on the deck in the summer morning light and coolness to have a quiet breakfast has been our ritual. Lately we have been sharing our time with a few hummingbirds eating their endless series of meals. But today was filled with the chaos of seven hummingbirds clearly relating with each other—and showing no cooperation.

The seven daredevil, dive-bombing hummingbirds are more interested in attacking each other and whipping around than in serenely drinking nectar and quietly soaking in the day. They weave in and out, coming close to us, paying us no mind because they have important work to do: preventing any other hummingbird from going to a feeder. If a hummingbird gets the chance to drink, unbeknownst to him he is about to be crashed into by another. They plow into each other and pursue each other at ridiculous speeds.

Now we are reaching the end of summer. It soon will be time to fly south. These birds need to be eating and conserving their energy for a rather long journey. But that strategy would require consciousness. They would have to be aware. It appears that they are aware of each other. Are they, or is this just a focus born of instinct? Cooperation and coordination at the feeder would be so easy; there is plenty of nectar for all. And yet this does not occur. Ants coordinate and cooperate. Why don’t these birds?

We tend to give animals too much credit. Life force is running through them. They have feelings, some of them. They form ties, some of them. But is this just the nature of the particular animal? Each having certain capacities? And when nurtured, those capacities shine forth? As humans, we have a gift and a curse: thinking. It will separate us from the rest of the world and bring us together with it. The Consciousness that feeds us brings us to an awareness of choice. We have options.

I am not so sure our hummingbird friends have options. Last summer, Elvis was such a monk, or rather an ascetic. But now, in community, the hummingbirds demonstrate individuality and warring just for warring, with no viable reason other than instinct.

I feel so lucky to have a human birth because I do have choice. I can consciously choose the Love running through every fiber of the world. I could, but do not have to, reject that which is Real and True. The hummingbirds have no choice. And though they look free and fun and amazing as they veer around and bang into each other, they can’t help themselves. We can.